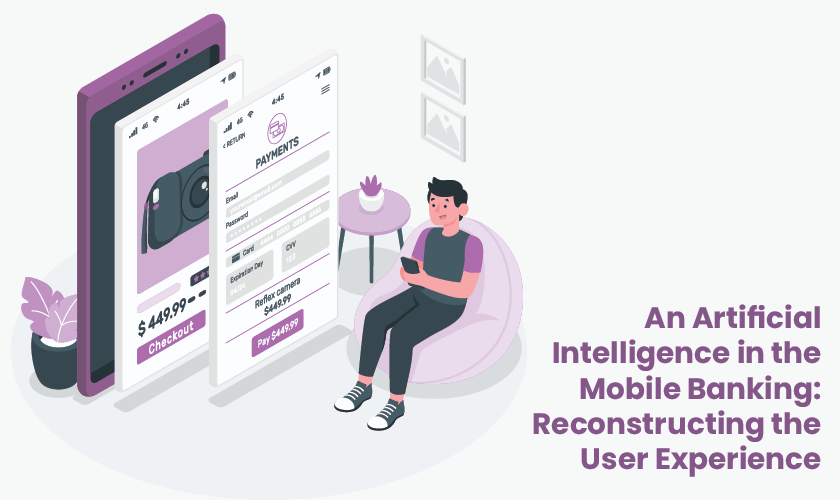 An Artificial Intelligence in the Mobile Banking: Reconstructing the User Experience

With rapid technological breakthroughs each day, it seems that businesses have some new ground to cover, some new platform to move to, and a few new services to incorporate. Where Amazon ran small bookstores out of business and is making headways into sectors that relied on a human resource to function, it is not a surprise that Amazon’s Alexa spells doom for many a personal assistant. From recommendations on their site to Alexa’s functions, Amazon, like many other businesses such as Facebook and Google, relies heavily on AI.

With online currencies threatening the Forex markets, banks too are exploring ways to digitalize their offerings. Where you had to go down to a local bank branch to find out how much balance has left in your account, you can now log in to your smartphone to do so in a minute. Studies and research shows that bank customers are spending a majority of banking time online. Despite the bad news for bank employees, increased online user interaction could be more helpful to the banking industry.

Just like AI systems in the banking industry give us accurate estimates of money we can afford to borrow and our financial future over decades, they can also detect fraud early on. Recording user spending habits can help AI systems alert the relevant banking departments when they discover a change in user behavior. It could potentially save banks billions of dollars over the years due to the current amounts they spend on fraud litigation and settlements. For users, it will keep them much hassle.

However, there are apparent hurdles in implementing AI in the banking system. Where wrong interpretation of your command can lead to Alexa or Siri playing the wrong song, a misstep by banking AI could create a global crisis within minutes depending on how high-up the mistake took place. AI remains in its’ early phase of testing. For now, we are studying how AI works and learns things such as playing chess but at no point should AI be led to becoming an independent entity. Failure to have safeguards could derail the financial system that has taken decades to build. Then there are of course regulatory requirements. Letting an AI system record and analyze private customer data that even law enforcement agencies do not have access to without a warrant could warrant government scrutiny, which could hurt banking businesses, enough of a reason to keep banks from using AI systems in their day-to-day operations. Despite that, the positives of implementation of AI systems in the banking industry outright the risks it poses and as our understanding increases, we can install safeguards to protect customers, their data, and the financial system.

Appedology, a professional App Development Company has made multiple banking apps that are entirely secured and give the user-friendly experience to both, a user and an owner. They always prioritize the customers’ requirements and still come up with a significant solution they require.