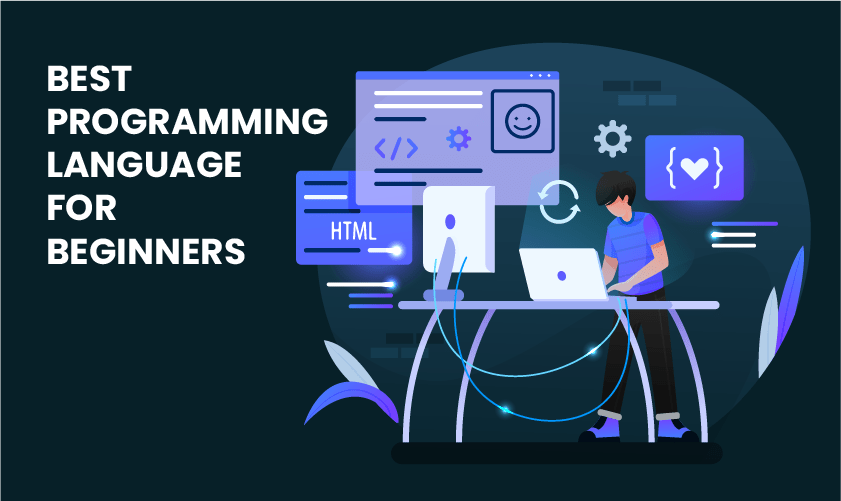 Best Programming Language for Beginners in 2020

Below you will find several common  best programming languages for beginners which are currently in demand among employers. You can learn a little about the vocabulary and the meaning, as well as how it is used by each. Don’t let the starter mark dissuade you, though. Even a programing language for beginners  described as suitable for a beginner gets more complicated as you become more skilled and more experienced in using it

Which programming language is easiest to learn for beginners?

Here is the list of easiest programming languages to learn for beginners:

Python is one of the best languages for beginners programming most widely used today and is a simple language for beginners to learn because of its readability. It is a free , open-source programming language with comprehensive support modules and community development, simple integration with web services, user-friendly data structures, and desktop applications based on a GUI. It is a popular programming language for applied machine learning and deep learning. Python is used to build applications such as Blender, Inkscape, and Autodesk for 2D modeling and 3D animation. This was also best programming language for games used to build popular video games, including Civilization IV, Vegas Trike, Toontown and others. Python is used for science and computer applications such as FreeCAD and Abacus, and is also used by popular websites such as YouTube, Quora, Pinterest and Instagram.

Java is one of the best programming language for games in use today, on demand. Owned by the Oracle Corporation, this general-purpose programming language and its object-oriented framework has become a staple for software that can be used independently of the platform ( e.g., Mac, Window, Android , iOS, etc.) due to its Write Once, Run Anywhere (WORA) capabilities.Java is known for its portability across platforms from mainframe data centers to smartphones, as a result of this feature. Today more than 3 billion devices run Java-built applications. Java programmers also participate regularly in a number of forums where they vet concepts or solve programming problems. Java is the easiest programming language for beginners and has a huge community and is receiving plenty of funding.

JavaScript is an object-oriented computer programming language widely used within web browsers to create interactive results. Typescript is a JavaScript superset which adds optional static typing to the language. Aside from HTML and CSS, JavaScript is one of the World Wide Web’s three main technologies. This is also used on many popular websites such as Google, Wikipedia, YouTube , Twitter and Amazon at the front end. It’s also used in common web frameworks such as AngularJS, Node.js, and React. JS. In this position the average salary for somebody is $72,500.

In March 2017, Swift made it into the top 10 in the common programming languages ranking of the monthly TIOBE List. In 2014 Apple developed swift for applications for Linux and Mac. An easy-to-learn, open-source programming language, Swift follows almost everything from the Objective-C language. Similar to other programing language for beginners  it takes less coding so learn to code is easy, and can be used with IBM Swift Sandbox and IBM Bluemix. Swift is used in popular iOS apps such as WordPress, Mozilla Firefox, SoundCloud and even in the Flappy Bird game. Swift developers make about $92,000 annually.

Developed by Microsoft, C# rose to fame in the 2000s for supporting the concepts of object-oriented programming. It is one of the most powerful programming language for beginners . Anders Hejlsberg, the creator of C#, says the language is more like C++ than Java. It is best suited for applications on Windows, Android, and iOS as it takes the help of the integrated development environment product, Microsoft Visual C++. C# is used in the backend of several popular websites like Bing, Dell, Visual Studio, and Market Watch. C# developers earn around $91,000 per year.

C is probably the oldest commonly used programming language, and it is the root of other programing language for beginners  such as C#, Java, and JavaScript. C++ is an enhanced version of C. Many developers today skip learning C on its own, while others think learning C first provides a valuable foundation for C++ development. Both languages are widely used in computer science and programming. C and C++ developers can make use of compilers for a wide variety of platforms, making applications developed in these languages largely transportable and learn to code. Both C and C++ are considered high-performance languages. As such, they are widely used in developing applications where performance is a critical issue, such as client/server applications, commercial products such as Firefox and Adobe, and video games. The average salary is nearly $91,000 per year.

If you want to start with a language known to be fairly easy to learn, take Ruby in mind. Created in the 1990s, it was designed to provide a more human-friendly syntax while remaining versatile from the point of view of its object-oriented architecture supporting procedural and functional notation of programming. Ruby on Rails (“RoR”) is a Web-application framework implemented in Ruby and the best language for beginners programming. Ruby developers argue that writing in a simple language and that learning time is fairly small. These attributes have resulted in a wide community of Ruby developers and an increasing interest amongst beginning developers in the easiest programming language for beginners.