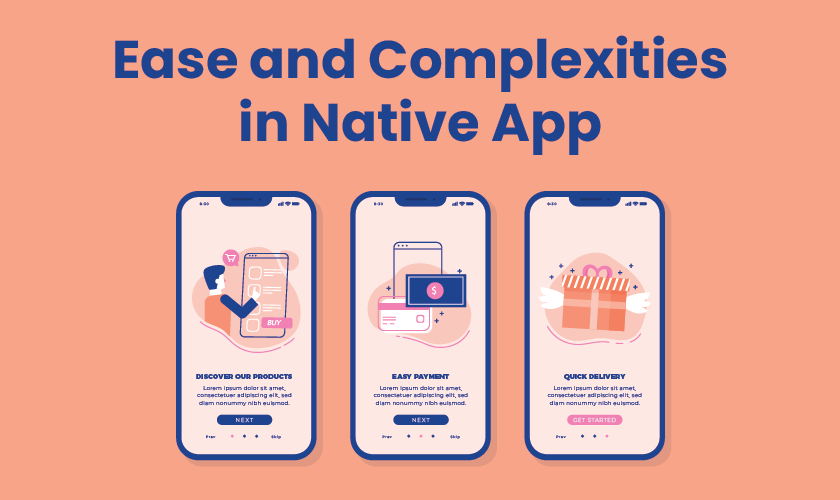 Ease and Complexities in Native App

Ease and Complexities in Native App: Nowadays, many companies use to develop native applications for their business as well as a few of them ignore its’ efficiency. Well, there must be the reasons behind in both conditions so let’s do a quick glimpse of the pros and cons of native apps.

The native applications stored on the smart devices by itself. Moreover, the numbers of users are friendly with its’ downloading and installing into their devices – and on a side, developers cannot be guaranteed that all the users are operating an exact version of the application at entire times.

•          The native applications perform its’ functionality with the built-in features of a device such as a camera, location and so on. It is swift in using as well as to work instantly on the device and gadgets.

•          The native applications are fully supported by the App-Stores, and marketplaces even the third party holders. It delivers ease to the users to find an app and install it into their devices.

•          Native apps have to pass the App stores test before launching into a market which makes it assured that an app is completely secured and free from the bugs. Also, it is friendly to their devices.

•          The native applications are expensive for the developers.

•          A cost amount of an app’s support is expensive, especially when the application has developed for more than a one operating system device.

•          Public use dissimilar mobile phones and might be using the different version of an application that creates difficulties for the developer to maintain the app in an accurate way as well as to offer a support.

Appedology is a popular app development company in USA. We have a team of professional developers that all belong to the broad and successful experience. Our developers do not compromise on a single aspect when it comes to the word digitalization. Now, this is what has made us get rule at the competitive edge of a market.